Skip to content
Today was a day filled with nature (that’s how we ecologists like it). It started the moment we left the hotel. The youngest of us was greeted by nature in the form of a katydid on her door handle. Being only seven, she was initially a little freaked out by the big green insect, but once I showed her there was nothing to fear, she came around. Even though they’re related to grasshoppers, I explained, katydids have smaller heads and look more like a leaf (more differences here). After letting it walk around on my hand for a bit, I released the katydid near a retention pond and joined my three traveling companions waiting in the car.

We headed due east and got a two-hour taste of rural Kentucky. We passed tobacco, corn, and soybean farms. We saw barns and silos and cows. I was surprised by the religious diversity we encountered. When I think of this part of the country, I usually think of Baptists. We passed a few Amish folks in their horse-drawn carriages, the tall gold minaret and crescent-topped domes of an Islamic center, and signs for a Shaker museum. I was hoping we’d pass a café with Derby pie, but it didn’t materialize.

Initially, we were going to visit the world’s longest known cave system at Mammoth Cave National Park. In a brilliant moment of forethought however, ELW took a look at their website last night and noticed that all of the tours today were sold out. So, we opted instead for a small cave with animal attractions. As we neared our destination, I could see billboard ads for it asking, “ever pet a kangaroo?” The childhood wonder part of my brain eagerly responded, “Nooooo!” The animal rights part of my brain recalled the horrors of roadside petting zoos and reacted with heavy skepticism. Soon, we pulled into the big gravel parking lot of the Kentucky Down Under Adventure Zoo and Onyx Cave. 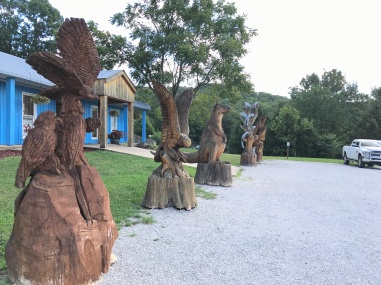 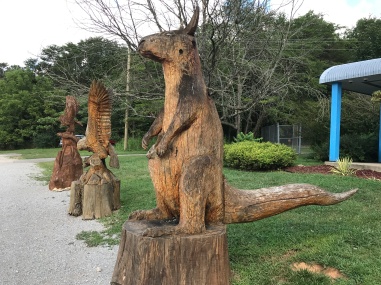 Stationed at either side of the visitor’s entrance, a small army of chainsaw-carved animal statues greeted us. We strode past them, into a gift shop, and up to the admissions desk. While ELW was getting our tickets squared away, the girls and I surveyed our surroundings. Among the cheesy souvenirs and canned nuts, we found a large terrarium with a sleeping Woma python inside and some taxidermy – an emu and a kangaroo – which looked a little worse for wear. Given the all clear to proceed, we followed a winding road down to another gift shop and the cave entrance.

We had an hour and a half to kill before the next cave tour, so we headed further down the road, where we encountered gray parrots, blue and red macaws, a couple of cockatoos, an owl, and some sun conures. There were even three laughing kookaburras. When we got to the lemur enclosure, I nearly cried. Just a month ago, I left my job as a lemur caretaker, leaving behind 47 of the most adorable animals I’d come to know. It practically broke my heart. Now, seeing them again, that heartache was rekindled. 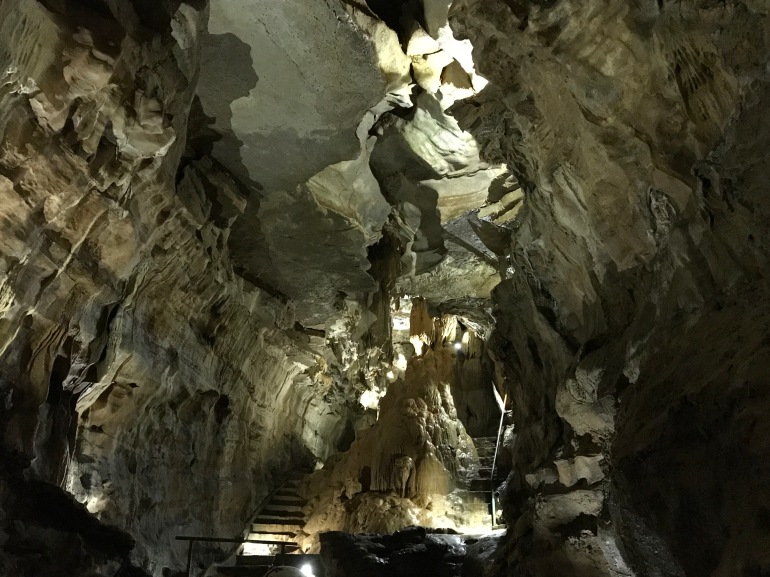 After grabbing a snack, we headed to the mouth of Onyx Cave to start our tour. Our guide, Chris, was a beefy fellow with pirate tattoos. He removed the padlock on a green wooden door and lead us several steps into the 58 degree coolness. Once we were all in, he pointed out an antique still, used at one time by old country moonshiners, trying to evade law enforcement. We headed deeper, trying not to bump our heads or slide down into the black pits on either side of the pathway. Eventually, we ended up 125 feet underground, but only changed our own elevation by 30 feet, the hill having risen above as we descended. It was likely the shortest cave tour I’ve ever been on.

Once outside again, it was finally time to visit kangaroos! I was positively bouncing with excitement. We paid for little cups of animal food before we were let into a large fenced-off area. Inside we found not only ‘roos, but wallabies, tortoises, emus (which were terrifying), and a Patagonian cavy or three. Yes, I got to pet a kangaroo! It was certainly the highlight of my day. Another high point was when we all went into the lorikeet enclosure and I was mobbed by eight or ten brightly-colored birds, fighting with one another for the tiny paper cup of nectar I was holding.

It was a great experience. All of the animals looked healthy and well cared for. There was even a sheep dog who gave us a demonstration of her herding skills. A zebra, and large pig, and fainting goats were hanging out, trying to stay out of the sun. Out near the parking lot, we saw some very bored looking bison. After snapping a few parting shots, we headed back west to find dinner.